An intensely visual ride through the worlds of our insides– “In-sight” is a multi-media work exploring the notion of the body as a permeable boundary. We are all contained in our own skin, yet the body is also the tool

through which we experience things outside. Going a step beyond, “In-sight” inhabits the liminal world of turning the inside-out. Movement and image are woven together in a rich visual world of projected floor-to-ceiling photographs, creating an ethereal, color saturated, permeable set through which the dancers move. They are transformed as they discover ambiguities of their own corporeality. Their hallucinatory and sometimes hysterical move

ments draw out the anxiety and beauty within the projected images, metaphorically drawing us all out of our own skin. As the piece progresses, still more projection surfaces are revealed–small cubes at the front of the stage, large floating membranes that move up and down stage to bring a part of an image suddenly closer or more directly into focus–all metaphors for how the body becomes a living border between sensuality and restraint, surrender and resistance. This is a work about the physics of touch and the fluidity of perception in a supposedly solid world. The performance is a revealing conversation between image and movement taken to a new level of emotional, visceral depth through unconventional and strikingly beautiful means. 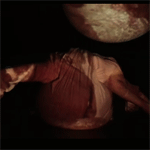 Papaya seeds oozing in between toes, the sound of clicking teeth as they morph into an echoey sucking noise–this is the vocal “undoing” and reconstruction of a projected two-dimensional image. In a series of three shows, photographer Alhadeff and vocal improviser/poet Sumner unravel the performance of photography and the performance of its viewing. Playing with subjects from desire to disease, from art censorship to self-censorship, each performance of Tongue and Trigger integrates audience comments, digitally delayed sound effects, improvised text, and 25 by 20-foot color slide projections. This “luminescent dialogue” explores the fluidity of perception–what we think we see and hear. Sumner plays with voice as found object, bringing to the surface the evidence of touch–compression, exertion, and release–found in the making of Alhadeff’s photographs.